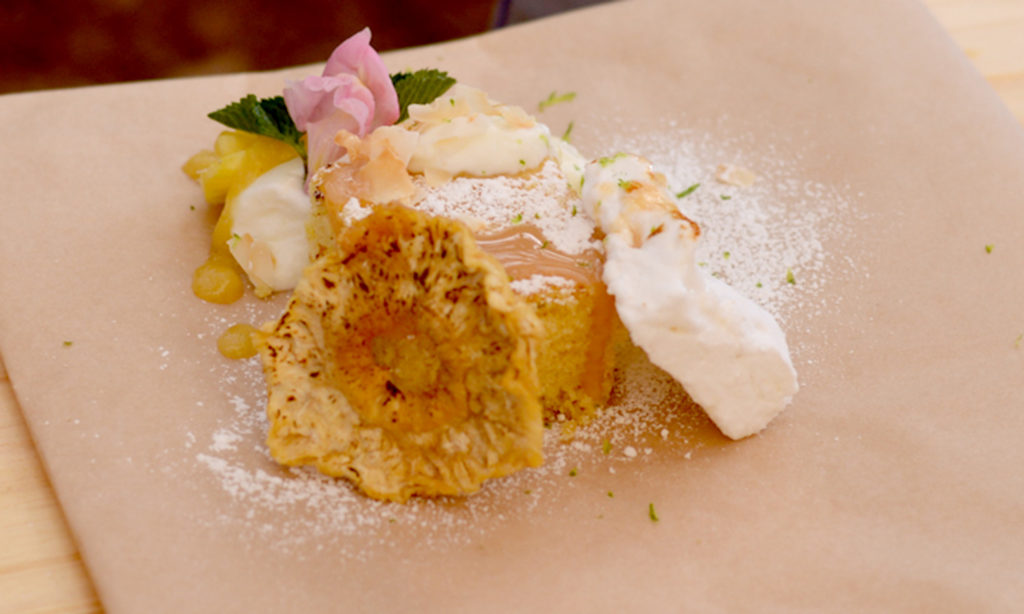 Cream the butter and sugar until light and fluffy, then beat in the eggs followed by the sour cream.

Sift in the flour, bicarbonate soda and a pinch of sea salt and fold through, then mix in the coconut and pineapple.

Pour into a lightly buttered and floured 18cm baking tin and bake for 1 hour to 1 hour 15 minutes, or until golden and a skewer comes out clean.

Cool slightly in the baking tin, then remove and leave to cool completely on a wire rack. Dust with icing sugar to serve.

Cut the skin from the pineapple then use the tip of a small, sharp knife or veg peeler to remove the ‘eyes’ all the way around.

Cut the pineapple into 5mm slices, pat dry with kitchen roll and arrange on the baking trays. Using a tea strainer, dust with half of the ground cinnamon. Bake for 35 mins.

Flip the slices over and dust with the rest of the ground cinnamon. Bake for 35-40 mins until dry and golden. Transfer to a wire rack and leave until cool. Store for up to 3 days in an airtight container.

Prepare Marshmallow as per packet instructions.

Drizzle Pineapple and Rum syrup on top of the marshmallows and allow to set. Once set, cut into cubes and dust with icing sugar.

Whisk in butter until melted and combined. Slowly pour in 1/2 cup plus 1 tablespoon cream, taking care because it can bubble over. Sprinkle in salt and stir to combine. Transfer sauce to a jar and cool completely before refrigerating.

Fill pot with 1½ cup water.  Add sugar and vanilla bean, and bring to boil. Reduce heat, and simmer for 3–5 minutes. Remove from heat. Stir in rum and let cool.

Place diced pineapple into a 2-quart jar. Top with syrup and seal. Refrigerate for at least 3 hours.

The Taste Master is a reality television show on SABC 3. It’s a 6 part series which broadcasts every Tuesday at 19:30.